Dave has had a long and successful career in a variety of Livestock related industries over the past 35 years. After graduating with a Diploma of Agricultural Science from Longerenong Agricultural College in 1976, he worked as an animal attendant at a local pig farm in Bendigo (then known as Mayfair farms). From there, over the next 15 years he had a variety of Sales and marketing roles in companies working in cattle artificial breeding , stock feed manufacture, and swine breeding stock supply for farmers.

In 1989 he took a sales and marketing position with a small privately owned animal vaccine company called AusVac, based in Bendigo, Victoria. This company became extremely successful and won a Telstra sponsored award for National Small business of the year. It grew from 4 full time employees in 1989 when Dave joined, to around 50 when it was purchased by Intervet in 1998, and Dave’s sales and marketing department had grown by then to 10 full time staff.

Dave and his wife Vikki co-founded a company called Think Pig Pty Ltd, which commenced operations on 1st April 2002. Initially this company specialised in sales of products for the pig industry. In December 2007, the trading name was changed to Think Livestock, to reflect the change of focus. Core business was now supply of vaccination and water medication equipment for all types of livestock. Many of the successful ideas used by Dave in the past are still embedded in the sales strategies of Think Livestock. The most important of these is to listen to the customer, and do your best to provide what he needs.

Sharon is most likely the first person you will speak to when you call us at Think Livestock. She has a very versatile and helpful manner, and loves the contact with her customers, whether it is on the phone, or face to face at one of the many field days we attend all around the countryside. Her favourite livestock are Alpacas (especially the baby ones!!)

Sharon grew up on a small farm, is very familiar with the needs of farmers, and has had a keen personal interest in equestrian activities. She has been with Think Livestock for 9 years, and has somehow found a way to keep all the books correct whilst also handling processing of orders, answering phones , organising field days and ordering stock.

Brodie started attending field days when he was about 12 years old, working with his father, Dave, at the Bendigo Sheep and wool show. Since then he has worked in several branches of agriculture (working on pig and poultry farms at one time or another) before returning to Think Livestock as a sales representative.

Presently, Brodie oversees all marketing activity at Think Livestock, including overall strategy and day to day operations. He can also usually be found at any of the field days attended by Think Livestock.

Vikki’s tasks vary from day to day, but include some of the pick-up, delivery and banking chores that are needed from time to time in a small business as well as office cleaning, usually on the weekends. Vikki has also worked at the same large pig farm as Dave and Brodie and was very good operator in the farrowing house. 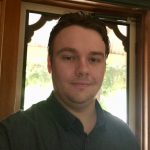 Mitchell is the newest member of the Think Livestock team. He has an extensive background and training in professional writing; and has designed a number of the flyers and pamphlets, used in our marketing. He is also involved in research of new customers, and database expansion.

Mitchell is currently expanding his responsibilities with us, and is now moving into sales in addition to his other roles.

Think Livestock’s new chief of security may not be as fearsome as his predecessor, but he’s much quicker on his feet. Henry is now in charge of securing Think Livestock’s premises, as well as keeping it clean of frogs, snails and other edible creatures.